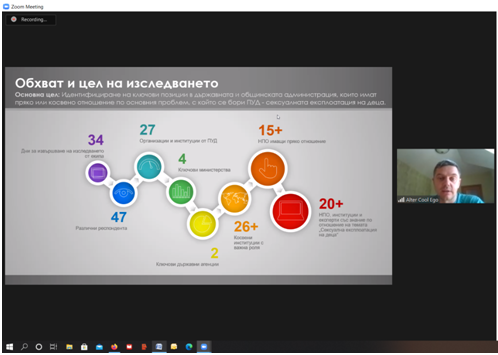 Another virtual meeting of Learning Action Partnership (LAP) members took place on May 11, 2021. The Agenda included presenting of the Analysis of Identifying the Key Experts and Institutions having Interest on Preventing Sexual Exploitation of Children in the frame of research made by the ‘small’ project of Re-Act Association and following the progress of the other micro projects in the frame of LAP.

Associated Professor Michail Okolijski presented to participants two projects of WHO focused towards children and young people and their mental and sexual health – HealthBuddy+ and Pocket Guide against Domestic Violence. He also presented Infographics on Positive Parenting, the print edition You are My Hero and the Campaign ‘Bulgaria is Being Vaccinated – Inform Yourself, Get Vaccinated and Embrace Life!”

Ljuben Georgiev from Re-Act presented the Analysis of Identifying the Key Experts and Institutions having Interest on Preventing Sexual Exploitation of Children – part of the deliverables of the so called ‘small’ projects of LAP.

The research brings out some problems in the contexts of which LAP works, such as: lack of statistics, lack of adequate data, lack of united knowledge on working of the institutions, lack of clear vision in the legislation, old hard-working structure of the state administration and lack of connection with the reality in its work. It became clear that in the more and more unstable political environment the institutions frequently do not synchronize their efforts what results as negative impact for children.

Representatives of organizations working on other ‘small’ projects gave a short review on the progress of their activities. It was decided clear unification of terminology to be done for better future work and Strategic Planning of LAP to be reviewed at a special meeting of LAP members.

During the event the participants discussed on the sensitivity of children towards some ‘innocent’ forms of violence and the tendency of Bulgarian schools to have higher level of tolerance towards bulling.

The members of LAP found that the low sensitivity on the topic of violence and its different kinds in society as a whole remains a problem.